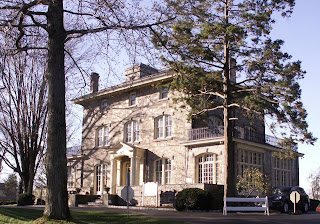 Solomon Mead, when asked his occupation stated that he was a farmer. His ninety years of life in Greenwich indicate that his outdoor occupations and his love for nature of which he was so observant were conducive to a long life; while his accumulation of a million dollars, indicates that he was a careful, shrewd financier. He was only fifteen years old when his mother, Hannah Mead, whose praises he was always sounding, bought of Ruben Holmes-the farmer, showmaker, school teacher- thirty-two acres of the tract under discussion last week. This parcel included land now owned by the Parmelee J. McFadden estate and the site of the old Titus Mead homestead where Timothy Knapp met his tragic death.

Hannah Mead was the widow of Joshua Mead who died early in life and Solomon was Hannah's only child. While the son was always unstinted in the praises of his mother we have reason to assume that she had an equal admiration for her only child.

It was here that Solomon learned to be a farmer and as his wisdom increased with his years he studied and worked and observed, becoming finally one of the most intelligent and well read of our local farmers.

He has the trait also of secretion and long after his mother's death he was adding to the original farm. He made many improvements upon the property. The blind ditches he laid our for drainage purposes still remain to ____ his skillful, scientific handling of the property.

Finally, the Solomon Mead possessions extended south to the Post Road and west to Maple avenue.

Forty years ago Francis Tomes and Frank Shepard appear as buyers and Mr. Mead began to realize the difference between buying low and selling high.

And yet the prices he obtained were insignificant compared with the price which the new real estate company is said to have paid.

At the time Mr. Mead disposed of his holdings there was an old potato cellar located on what is now the rear of Dr. Hyde's property.

Potatoes being the principal and profitable crop of the farmers a century ago, no farm was without a storage place. The old cellar was built so many years ago that it was probably the work of Samuel Seymour, when he owned and cultivated the entire tract, as well as land on the west side of Maple avenue.

But the memory of the old potato cellar is bond to recur to every Academy scholar who in those bygone days imagined that it was a robber's cave and gathered there with his playmates while scheming for mischief.

Probably in the entire career of Solomon Mead nothing interested him more than the construction of the stone house on Maple avenue still in the possession of members of his family.

The old farm house from which every field of the one hundred and fifty acres was visible wood just inside the south entrance to the present house. Possibly Henry Bush built it for in the spring of 1755 he sold it to Samuel Seymour and it remained in the family till 1830 when Solomon Mead bought it with eight acres of land.

This included the two acres, now the cemetery near the church, where lie the remains of Solomon Mead.

The old Seymour farmhouse was a fine example of the Connecticut houses built between 1675 and 1700.

When the Saunterer first saw it, it had a comfortable "sit down" appearance characteristic of all the old gray shingle, low-studded sweep backs of that period of construction.

Near the north end was the well house in which an empty bucket hung over the curb.

Under its small front windows, that looked out of the porchless house, bunches of phlox and marigold nodded in the summer breeze. It was overshadowed by the great stone house, then just completed and it was only a short time after that the family moved into the new house and the old one disappeared.