On this unusually warm and mild autumn morning the long lost gravestone for Rachel Mead, died 1799, was finally returned to its rightful place.

With the assistance of Christopher Shields, archivist of the Greenwich Historical Society, we were able to pinpoint the cemetery where the stone belonged. Her grave is in the New Burial Grounds Association Cemetery next to the Second Congregational Church of Greenwich.

We used the Hale Collection of gravestones from the archives. These are not available online at this time. 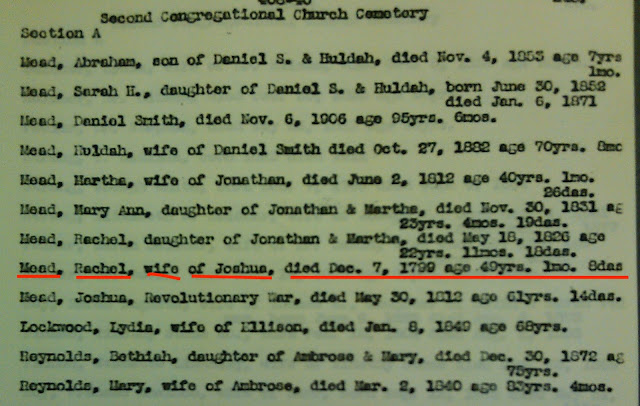 The gravestone arrived in a trailer towed by Norm Davis, a direct Mead descendant of Joshua and Rachel Mead. The stone is a brownstone that measures 6" by 20" and about 30" tall.

We appreciate the cooperation and support of Allen Wilson, one of the cemetery association's directors. 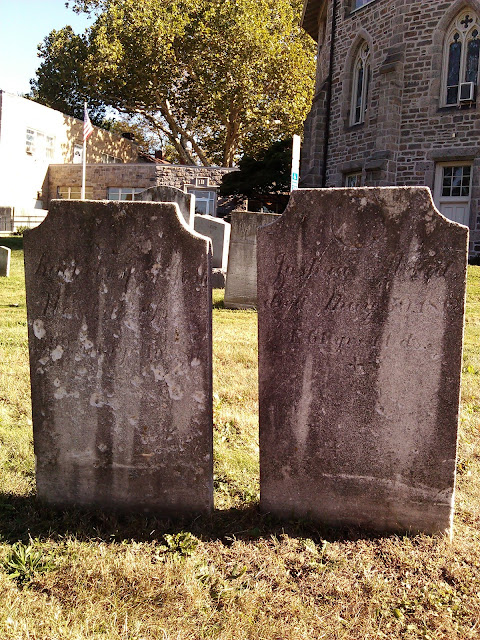 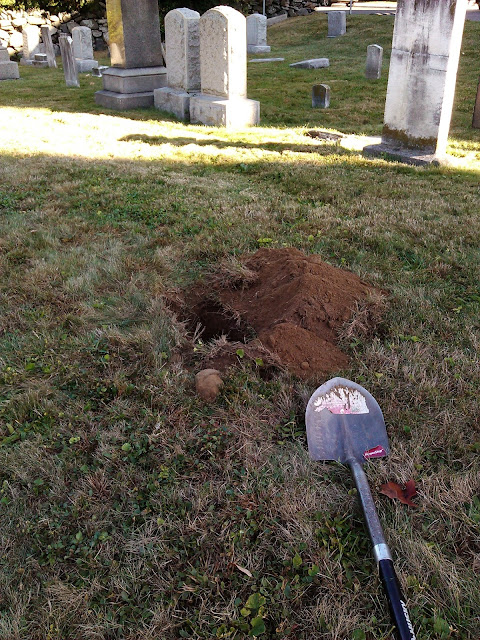 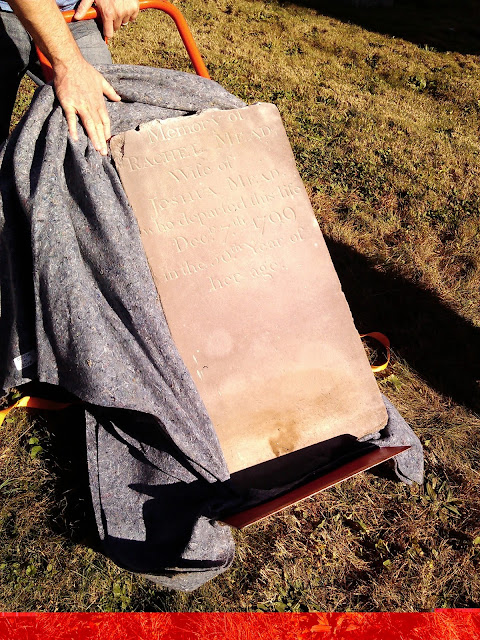 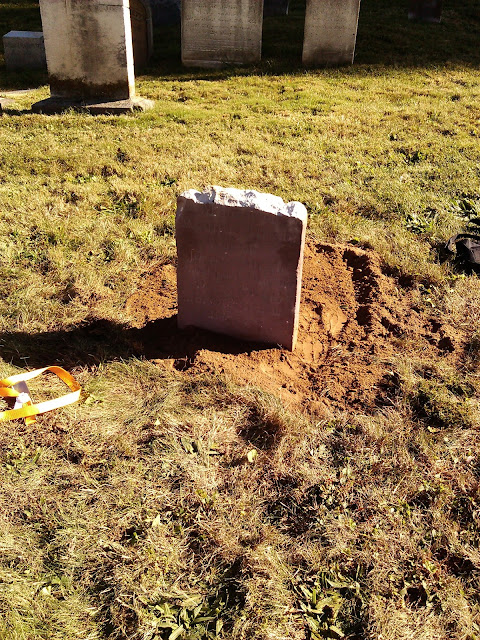 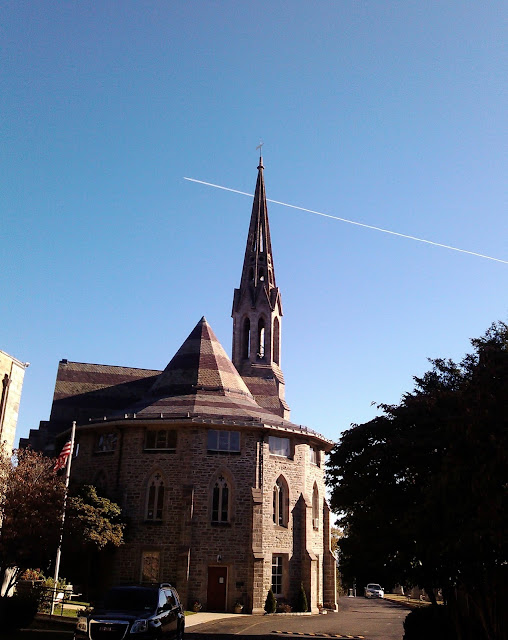 
This story begins many years ago. Many, many years. All good stories have a beginning, a middle and an end. But it’s hard to say when this story really begins. So I’ll pick a date, and work in both directions. Bear with me. My parents bought their house in Port Chester, NY in 1956. The house had been built in 1927. Sometime around 1962 my dad dug up a series of stones that had been serving as a sort of rough, and dangerous, set of steps up a slight hill in the backyard. One of the slabs was quite large. He rolled it over, and discovered that it was a broken headstone. The writing was very clear: Rachel Mead, wife of Joshua Mead, departed this life Dec. 7, 1799 in the 50th Year of her age. My dad had been working on our family history since his teens, knew all the main colonial families in the Westchester and Fairfield county areas, and recognized the surname Mead right away. The Mead family is one of the earliest settlers of Greenwich, and has dozens, if not hundreds, of descendant branches by now. Their records are well established in churches and land documents.
He did a little digging, so to speak. Anyone who does genealogical research knows the routine. Dead ends, misinformation, family lore, a deliberate secrecy around events that families preferred to keep out of the public records. After just a bit of sleuthing, he proudly announced to us one day that he had found the records of Rachel Mead - and we were direct descendants. I’ll layout the details below. The mystery of course is, how did the stone end up in Port Chester, at the house he bought. When, where, who. Those details would take a bit more work.
Rachel Mead does have a headstone at the Second Congregational Church in Greenwich. So it’s not missing. Jeffrey Bingham Mead, who is heavily involved in the Mead Family records as well as Greenwich history in general, helped fill in some gaps. In 1918, there was a storm that toppled some scaffolding that has been erected for steeple repairs. Many headstones were damaged, and subsequently replaced. Rachel’s headstone was apparently one of them. How did it end up in Port Chester, at a house that didn’t exist until 1927? That’s the part of the story that I haven’t been able to fill in. Maybe the contractor who replaced the headstones took the broken ones to use on projects. Maybe it went to a dump and was saved by someone who thought it was useful. I don’t know. But it was AWOL for about 10 years at least.
Through luck and stubbornness, I found Jeffrey online and contacted him. You can read about that on his Mead Burying Grounds website: http://meadburyinggrounds.blogspot.com/... Jeffrey generously stepped in an arranged to have the stone repatriated. It was more than I had hoped for. My best friend and brother-from-another-mother Don Barbro came to help, with his son-in-law Peter Hudson, and my wife Lu-Anne. We loaded Rachel onto the trailer, and soon her headstone was back where it belonged, just a couple of feet away from where it was originally placed in 1799.
I have to say that it proved to be a lot more emotional than I had anticipated. Rachel is a total stranger to me of course, in spite of the bloodline. And it’s not like this act corrected a years-long miscarriage of justice. I had decided a long time ago that the stone belonged with a Mead family caretaker, and frankly I didn’t really care who that might be. I just couldn’t bear the thought of leaving the stone in the cellar, or on the curb. Jeffrey had the right idea and I am so grateful that he was able to get permission to do it, and then actually dig the hole for it. But standing there, on a sunny Saturday morning, it occurred to me that here we were - gathered, like so many family and friends often have to do, in a cemetery. We were standing exactly where Rachel’s family must have stood, on what was surely a miserable day in December. Perhaps her husband Joshua laid his hand on the headstone before turning away. I like to think so. And I like to think that in some way, this little act has brought Rachel’s story full circle - again.
So, if you’ve stayed with the story so far, thank you. I’m almost done with telling the public part of it, although personally the story will probably consume a few more hours of my free time. I’ve told the story from the middle, going forward. For anyone interested, I will now go backward. Here’s how the ancestral link works. The * means I have actual family photos of the person. b.=birth, d.=death.
Norman Davis III b.1954 (that’s me):
So that’s the unbroken chain. Thanks for the ride, Rachel, now please Rest In Peace.