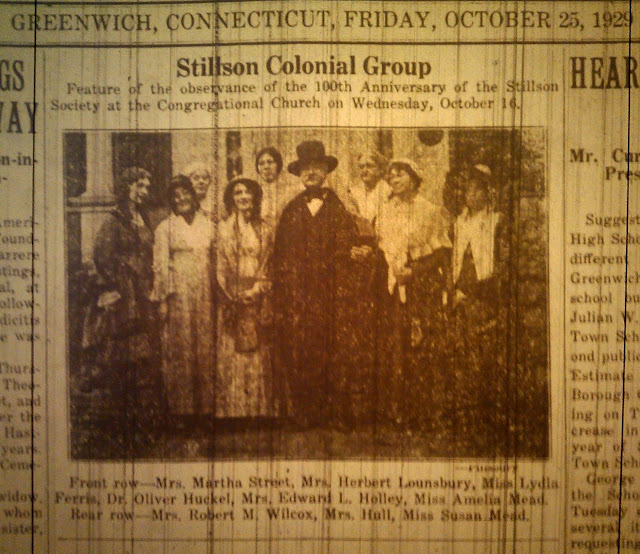 Whitman Bailey: Milo Mead, A Prominent Citizen of Greenwich in the Eighties (1929) 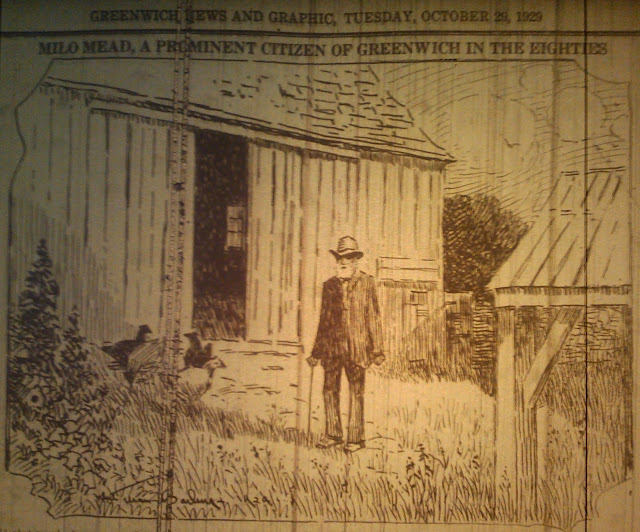 Old photographs have a marvelous way of awakening interest in a place and of recalling citizens of other days. Sketched from an early likeness, Milo Mead is shown here just outside his barn, where he was usually found, unless he was fulfilling his Sunday duty by going to church. 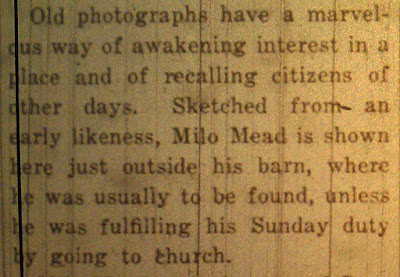 Milo Mead was the son of Deacon Jonas Mead. During the early eighties, he decided that the shore lands, bordering the Byram River, could be made into a thriving investment. Deacon Mead had left by will considerable property to __ his sons, Milo and Mark, but the former appears t have been the typical up-and-coming financier of the family. The vast farmland which Milo now owned was cut up into small lots, for which he obtained the sum of $200 per lot. Doubtless a fair-sized sum of money, when one considered a fortune at that time.

What was sold, and built upon, the entire section bordering this side of the river was called Meadville. But some years later this name was changed to New Lebanon, which still clings, I believe, in connection with the titles of certain buildings about this neighborhood of and the Lebanon dock, situated in what is now known as East Port Chester. A misleading name is this East Port Chester, for there and some people who still believe that they are residing outside the township.

After this land was plotted out of Greenwich. When Milo Mead was asked why, he changed the name of Meadville to New Lebanon, he replied that it was because of the cedar trees which grew abundantly along the shore, since they reminded him of the cedars of Lebanon mentioned in the Bible.

Milo Mead lived to a good old age. He was always keenly interested in the development of Greenwhich [Greenwich] until he died, August 2, 1906. On that day the town lost a much-beloved and worthy citizen.


Will be Home of Ralph Brush, Descendant of Mead Family

The old Colonel Thomas A. Mead homestead on West Putnam Avenue, one of the old landmarks of the town, is being moved from its present original location facing on the Boston Post Road, to Grove Lane. The house and property were purchased from Mrs. Norman T. Reynolds, the former owner, by the Turnpike Corporation, of which Ralph E. Brush, senior member of the law firm of Brush & Hanan and a life long resident of the town is president. 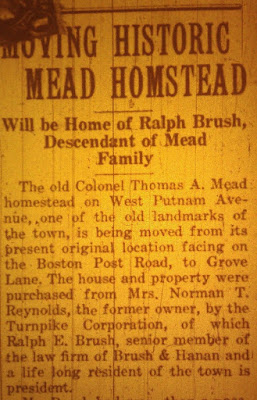 Mr. Brush had more than a passing interest in the old Mead homestead and by a special arrangement with the Turnpike Corporation, he took possession of the old homestead and is now having it moved on about an acre of ground at grove Lane, and with his family will occupy the premises as their future home. 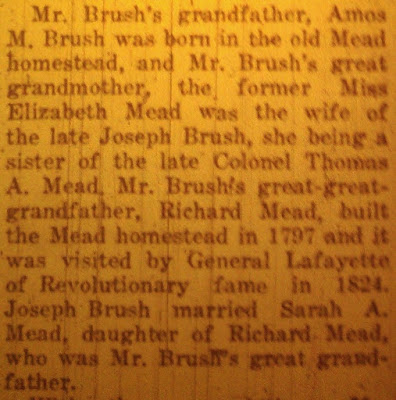 With these associations, Mr. Bush was anxious to preserve the old homestead and so decided to take it over, move it to his own property and make it his future home. Some time ago, Mr. Brush acquired the late Judge R. Walsh property on Dearfield Drive, through which estate Grove Lane is a part.

The house is being moved back by the way of Dearfield Drive to the site on Grove Lane and it will face toward the Post Road. Five generations have lived in the old homestead. The late Colonel Thomas A. Mead fought in the Revolutionary War and upon his death, his son Zophar Mead became the owner. When he died his daughter, the former Miss Bertha Mead, now Mrs. Norman T. Reynolds, inherited the old homestead, which she later sold to the Turnpike Corporation. The former site of the Mead homestead with land adjoining is retained by the Turnpike Corporation and it s planned to erect one or more buildings on the property containing stores and apartments, in the near future.

Posted by Historic Mead Family Burying Grounds Association, Inc. at 11:58 AM No comments: