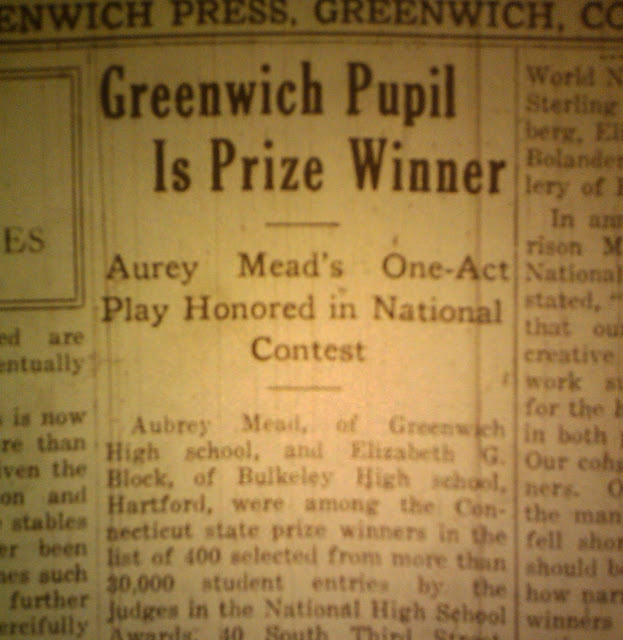 Aubrey Mead, of Greenwich High school, and Elizabeth G. Block, of Bulkeley High school, Hartford, were among the Connecticut state prize winners in the list of 400 selected from more than 30,000 student entries by the judges in the National High School Awards, 40 South Third Street, Columbus, Ohio. This annual scholarship contest brings together the best short stories, essays, poems, articles and plays written by students in High schools throughout the country. The Greenwich and Hartford pupils have submitted the best one-act plays.

In announcing the awards, Harrison M. Sayre, Director of the National High School Awards, stated, "This contest clearly shows that our schools are developing creative minds. The quality of the works submitted speaks volumes of the high type of training given in both private and public schools. Our congratulations go to the winners. Our honest complements to the many contestants whose work fell short of winning a prize. It should be a consolation to know by how narrow margin some of the winners excelled losers. The nation-wide endorsement given to this scholarship contest has been so enthusiastic that I am glad to announce that the National High School Awards will be continued next year."

In addition to the cash prize to each winner, handsome loving cups will be presented to the schools attended by the first and second prize winners in each contest.