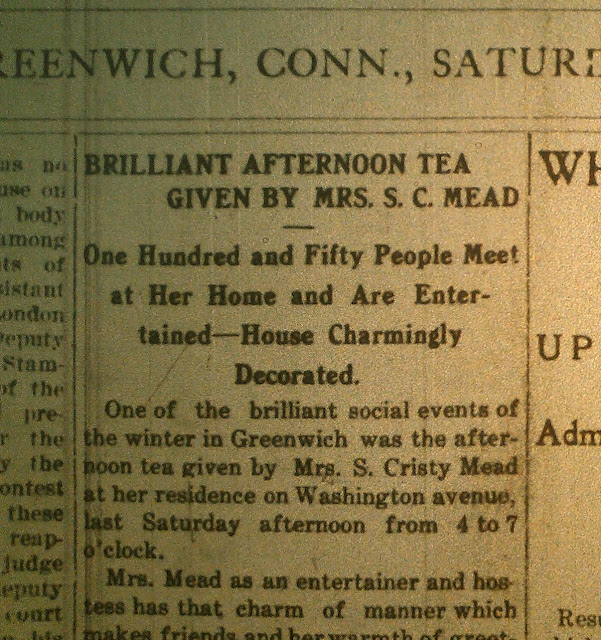 One Hundred Fifty People Meet at Her Home and Are Entertained – House Charmingly Decorated.

One of the brilliant social events of the winter in Greenwich was the afternoon tea given by Mrs. S. Christy Mead at her residence on Washington avenue, last Saturday afternoon from 4 to 7 o'clock.

Mrs. Mead as an entertainer and hostess has that charm of manner which makes friends and her warmth of greeting is so cordial that you cannot but failed to be imbued with the same spirit and her-at-homes are delightful affairs.

A hundred and fifty people were greeted by Mrs. Mead during the afternoon and early evening, including society folks and men prominent in various walks of life, and not only were their guests from Greenwich but from New York and all along the shore.

The warmth and color and spirit of it all made it a social function of unusual enjoyment. Diamonds and beautiful gowns added their brilliancy to the ensemble.

The color scheme of the decorations of the entire lower floor of the house was yellow and white, a most beautiful combination. Coming in from the cold, bleak air and the snowy ground, it was a most exhilarating transformation. Daffodils, jonquils intertwined with the white flowers of early spring, pussy willow buds and others coming about this time of year, with smilax and...  without their blending colors giving delight.

The table in the dining room, on which were the delicacies which go with an afternoon tea, was most charmingly decorated. In the center study, on a beautiful lace centerpiece partly covering the table, was a golden basket of yellow and white flowers, the handle trimmed with yellow ribbon, an exquisite conception which was greatly admired. Adding grace to the effect were the silver and other receptacles, family heirlooms.

Mrs. Mead was attired and a yellow silk gown, just the color of the daffodils and jonquils, it was veiled with bordered chiffon. Mrs. Bliss wore green satin with jet tunic effect, Mrs. Bueb had a gown of soft rose satin, simply made. Mrs. Bray wore a white lace dress. Miss Ritch had on a pink satin gown veiled with white and trimmed in maraboua. Miss Mildred Mead wore white silk veiled with blue.


Posted by Historic Mead Family Burying Grounds Association, Inc. at 11:03 AM No comments: