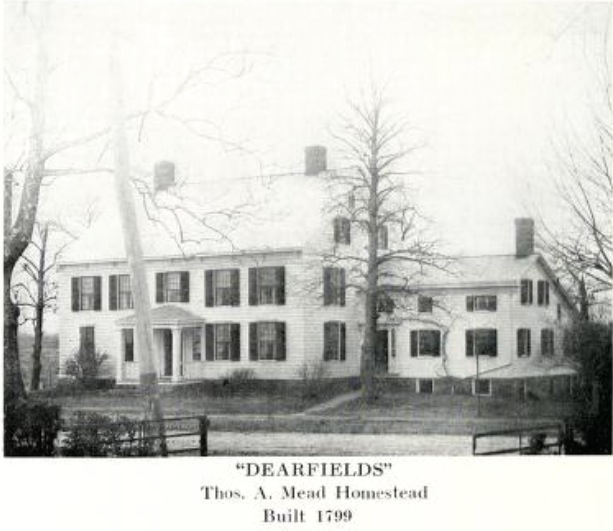 The ancient dwelling and the old button ball tree, do you know them? Of course you do or you haven't lived in Greenwich a great while.

The house is spoken of as the old Colonial Thomas A. Mead homestead, and its hospitable doors have opened and shut for one hundred years to members of this Mead family and their friends, and the stranger is often sheltered there. 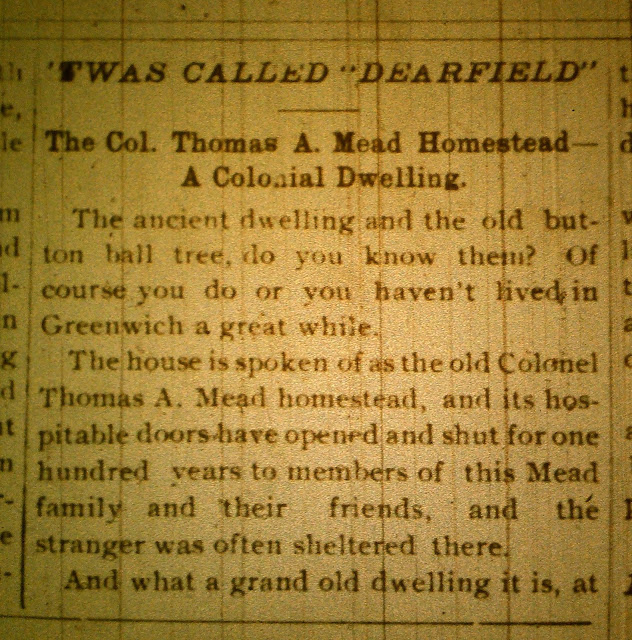 And what a grand old dwelling it is, at once suggestive of refinement, quiet and comfort. Nowadays such houses are fashionable, and they call them colonial, but, as usual the imitation has not the beauty in any respect of the original.

Dr. Amos Mead, who built the house, was the father of Col. Thomas A. Mead, and it is the homestead of this branch of the Meads.

When Richard Mead was about to take to himself a Colonial dame to share his lot, his father, the doctor, built this house and gave it to him, as a wedding gift. It was called "Dearfield," the dear spelled with an a and not two e's. It was built in 1797, so the knocker on the door says, and cast a "pile" of money for those days, and its frame went abroad for miles around as being a great and magnificent home, and one of the sights of the times. 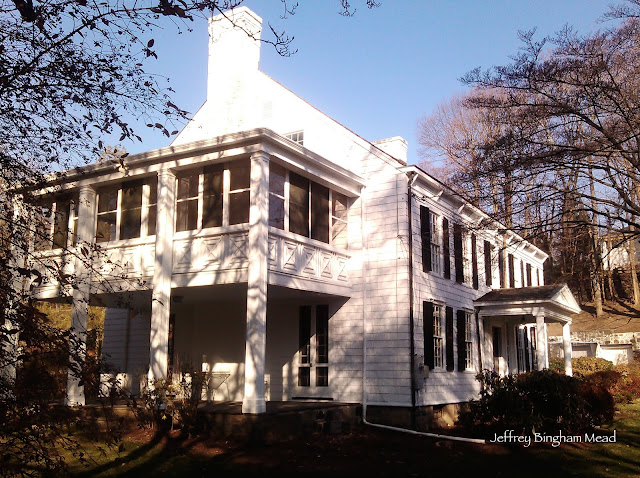 The old brass knocker on the front door still holds its place as of old, although there was a brief season when it was relegated to the garret because the door bell had pushed it aside, but 'twas only for a time, for Miss Lucinda Mead, while rummaging in that top room, discovered it on its resting place, a beam, where it had grown green with verdigris, and took it down, polished it to its former brightness, and put it back on its old friend, the door, where it has remained ever since, admired by all lovers of things antique, and readily seen from the street by the passerby.

When Richard Mead died the house came into the possession of the son, Col. Thomas A. Mead, who was in his day one of the prominent citizens of Greenwich, sturdy, staunch, and true, a type of the men who made New England famous and America what it is to-day. Col. Mead, during the last few years of his life, used to be fond of sitting on the pitch near the front door and watching the boats on the Sound. He loved that beautiful marine view. And it certainly is one of the most charming pictures to be found anywhere.

One day Wm. M. Tweed sent word to the Colonel that he would like to buy the lot in front of his house, and asked him his price. "I have no price," said the Colonel. "Go back and tell Mr. Tweed that I don't care to put my eyes out. No, no, tell Mr. Tweed I don't care to sell it. It's worth more to me than money." And on the long summer afternoons, only a few years ago, he used to sit there, "All the landscape like a page perusing." The house is now occupied by a daughter, a grand-daughter and a daughter-in-law of Col. Mead. 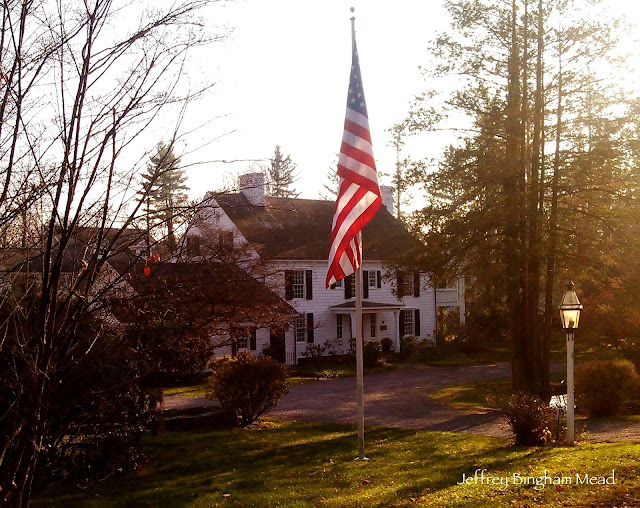 The immense button ball tree, which stands directly in front of the house is a landmark. We doubt if there is another tree of this kind in the State of its size, and don't dare to say what its diameter or circumference is near the ground. As it stands in the picture, but a faint idea of its proportions can be discerned. he captain of every Sound steamer knows it, and oystermen use it as a mark to find their grounds. It was planted about 1700, so that it is nearly two hundred years old.

When Gen. Lafayette passed through Greenwich in 1824, and was given a reception at Put's hill, he stopped, it is said, at the top of the hill in front of Colonel Thomas Mead's and alighting from his carriage, shook hands with a number of people who were there awaiting his arrival in town beneath this grand tree.

The top of the old landmark is gone, it was used for firewood in the days when the British red coast chased Put down the hill. Coal they did not have in those days.

It had been a snowy week, and the wood pile had disappeared. Danger lurked on every side, it was not possible to go to the woods to replenish the fuel and so the top of the button ball was cut off to be used for firewood.

Will the two rather the storms of another one hundred years, will changes be made as great around them as have taken place in the century just passed? 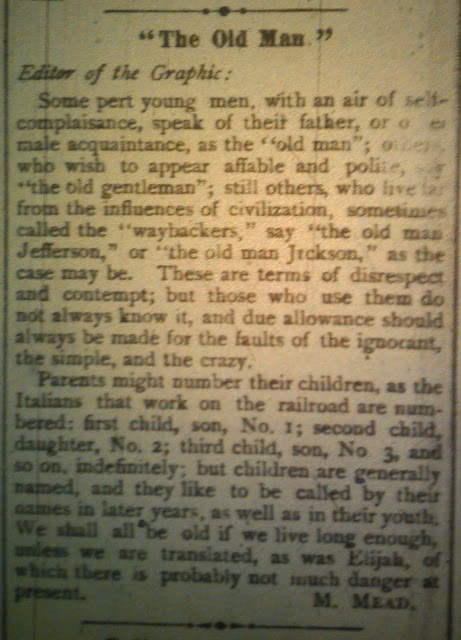 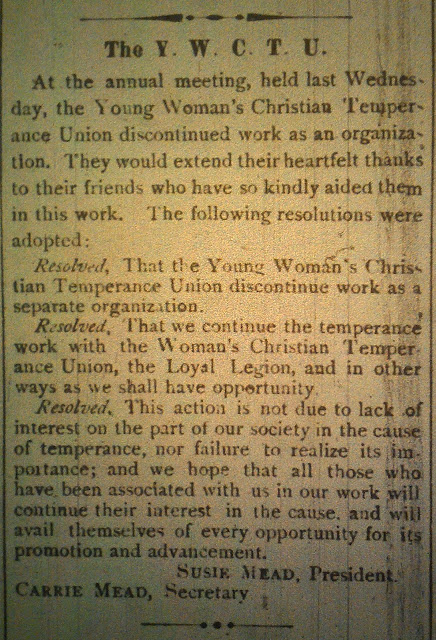 Pres. Dole [of Hawaii] and Greenwich: Has Many Friends Here-He Spent Two Years at Round Hill (1898) 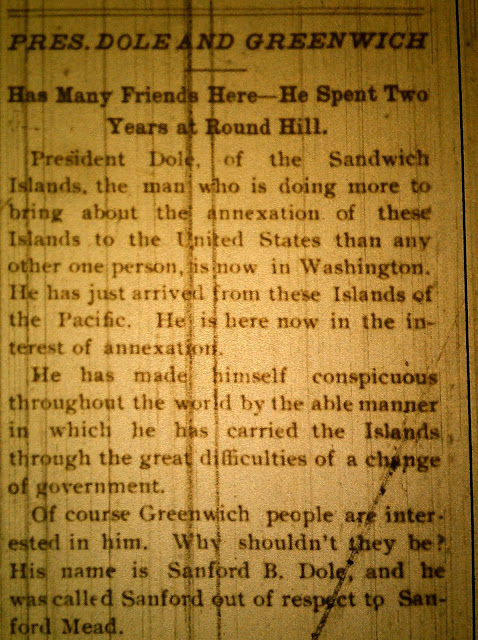 President Dole, of the Sandwich Islands, the man who is doing more to bring about the annexation of these Islands to the United States than any other one person, is now in Washington. He has just arrived from these Islands of the Pacific. He is here now in the interest of annexation.

He has made himself conspicuous throughout the world by the able manner in which he has carried the Islands through the great difficulties of a change of government.

Of course Greenwich people are interested in him. Why should't they be? His name is Sanford B. Dole, and he was called Sanford out of respect to Sanford Mead.

He was born in 1847 in Hawaii and is the son of Daniel Dole and Emily Ballard, both being natives of Maine. Daniel Dole went to the Sandwich Islands in 1832 as a missionary. His wife died there in 1849, and he married Miss Charlotte Close Knapp Dole, who had gone to the Islands as a teacher, and who was a daughter of Gilbert Close, of Stanwich. Sanford B. Dole really knew no other mother than the second wife of his father.


President Dole began his studies in the Sandwich Islands and completed his education in this country. He came to the United States in 1860, when he was 22 years of age, and made his home with Isaac O. Close and wife at Round Hill for two years, and then went to Williams College, from which he was graduated.

He read law in Boston and returned to the Sandwich Islands in 1871.

In 1873 he married Miss Annie Kate, a young lady from Maine. He met Miss Kate in the Sandwich Islands, where she was visiting, but was married in Maine. Twice since that time he has visited he United States, the last time in 1891.

He practiced law in the Islands and occupied, before he became President, very important positions of trust.

President Dole is a tall man, a little over six feet in height, wears a full beard and weighs about 180 pounds. His presence is dignified and commanding.

He is quite well known in Greenwich, and was the guest in 1891 of the late Charles Mead at Charles Mead Point.

It is hoped that he will not forget that Greenwich is but a short distance from Washington. He would receive a cordial welcome from our townspeople.