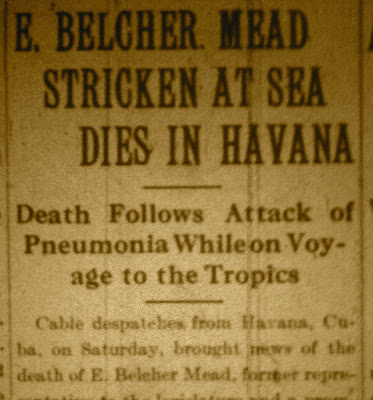 Death Follows Attack of Pneumonia While on Voyage to the Tropics

Cable dispatches from Havana, Cuba, on Saturday, brought news of the death of E. Belcher Mead, former representative to the legislature and a prominent and wealthy Greenwich resident, which occurred there early on that day. Mr. Mead with Judge Fred A. Hubbard was on a pleasure trip to the Indies when he was stricken with with an attack of pneumonia and his condition grew steadily worse after he was taken to a hospital at Havana where death occurred early Saturday. He was in his 67th year.

News of the death of Mr. Mead came as a great shock to the entire community as he was apparently enjoying his usual good health when he departed on the southern cruise about a week ago. He is believed to have suffered from a cold while aboard the ship enroute from New York to Havana and the ailment developed into an acute attack of pneumonia which owing to his advanced age and resultant weekend condition, caused death quickly.

The remains are being brought to Greenwich by Judge Hubbard and it is expected that they will arrive sometime tomorrow. The uncertainty as to the arrival has made impossible definite arrangements for the funeral to be made.

Mr. Mead was a descendent of one of the oldest families in this section, his ancestors have them come to this country early in the sixteenth century. He was a son of Captain Elkanah Mead and Jane Mead and one of eight children. Two brothers, Elkanah and Abram, and one sister, Elizabeth Mead, survive him besides a widow and two children, a son and daughter.

Mr. Mead was born in Greenwich and was a lifelong resident of the town. When still a young man he became identified with the Standard Oil Company and in later years he was one of the really successful men in the oil business. He retired from active service a few years ago.

While Mr. Mead was always a public spirited citizen and deeply interested in the affairs of Greenwich he refused to hold public office until 1914 when he accepted the nomination as candidate on the Republican ticket for the legislature and he was elected. He refused a renomination and served only one term. He was recently elected a director of the Greenwich National Bank to succeed the late Willis H. Wilcox.

Mr. Mead was for years a member of the Second Congregational Church and he served faithfully as a worker in the ranks of the congregation.
Posted by Historic Mead Family Burying Grounds Association, Inc. at 2:52 PM No comments: