About the Mead Family. Some Facts Obtained by Spencer P. Mead (1899) 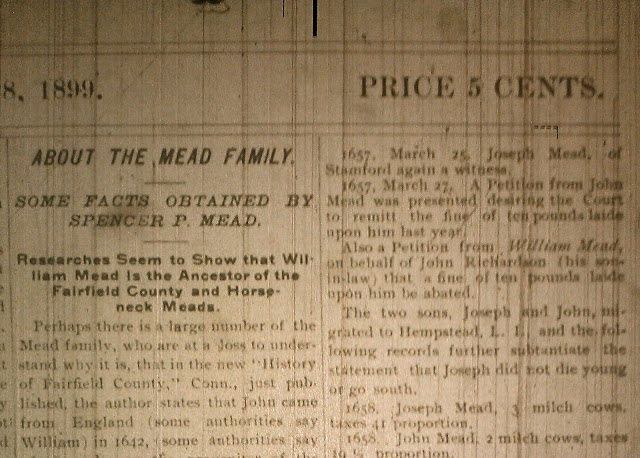 Researches Seem to Show that William Mead is the Ancestor of the Fairfield County and Horseneck Meads.

Every member of the family, no doubt, is thoroughly familiar with the tradition in regard to the alleged John, therefore the writer will give the history of William.

In 1635 there arrived in Massachusetts many ships with passengers from England, and among those arrivals is found the name of Gabriel Mead (called Goodman Mead,) who was born in 1587, and died March 12, 1666, aged 79 years. He was probably married twice, his second wife being Johanna, the daughter of James Bates. He was born in 1528, died 1655, and sailed England in the ship "Elizabeth," Captain Stagg, April 1635, and it is supposed his son-in-law, Goodman Mead, was in the same vessel. Richard Bates (son) lived at Lydd, in County Kent, England, from whence the family is supposed to have come.

Recent researches seem to show that William Mead, the ancestor of all Fairfield County, and the Horseneck Meads, was a brother of Gabriel Mead, and that they both came from England on the ship "Elizabeth," April, 1635; furthermore, the 'Coats of Arms' of the two are identical.
Gabriel Mead remained in Massachusetts and is the ancestor of the Massachusetts Mead family. William, however, followed the tide of emigration, which at that time was toward the Connecticut Valley. The first English settlement of Connecticut was made at Windsor in October, 1633, and another at Wethersfield soon after, where William probably first settled.  Andrew Ward and Robert Coe, representatives of about twenty-two families of Wethersfield, on the 4th day of November, 1640, purchased from the New Haven Colony a large tract of land lying in Stamford, which in the spring of 1641, was settled by the Wethersfield families, and among the first forty-two land proprietors of Stamford, we find the name of William Mead. The following is a copy from the Stamford town records:

Dec. 7, 1641, William Mayd (Mead) received from the Town of Stamford, a homelot and five acres of land. This William was the ancestor of the Mead family of all Fairfield County Meads. We have record of three children, but there probably were four, a son who died in 1658. They were as follows:

Joseph, born in 1630, married December 4, 1654, Mary Brown of Stamford, died May 3, 1690. He was the ancestor of the Ridgefield and North Fairfield County Meads, and had Zachariah, Joseph, Daniel, Elisha, Richard, and Mary.

Martha, b. about 1632, who married John Richardson of Stamford.

John, born about 1634, who married Hannah Potter, of Stamford, probably in 1657, died February 5, 1699. He was the ancestor of the Greenwich Meads, and had John, Joseph, Hannah, Ebenezer, Jonathan, David, Benjamin, Nathaniel, Samuel, Abigail, and Mary.

Tradition in the family had declared that Joseph died young, or if he lived, went south, and became the progenitor of the Virginia "Meade Family." Researches, however, prove the facts to be different. The Virginia Meade family are in no wise connected with the Connecticut Meads, but are descended from Andrew Meade, born in County Kerry, Ireland, in the latter part of the seventeenth century. He came to this country about 1728 and settled in Nansemond County, Virginia, where he died in 1745. Colonel Richard Kidder Meade, Revolutionary soldier, served on General Washington's staff; Rt. Rev. William Meade, D.D., late Bishop of the Protestant Episcopal Church of Virginia, and Richard Meade (2), of Petersburg, Va., Member of Congress, 1847 to 1853, are of this line.

The following record of some of the proceedings of the Court of Magistrates held at New Haven, further shows that both William  and Joseph, were early settlers here;

1654, October 18. Joseph Mead, of Stamford, testifies on behalf of his sister Martha, the wife of John Richardson.

1656, May 26. John Mead, of Stamford, enters an action of ye case against Richard Law, of Stamford.


1657, March 27. A Petition from John Mead was presented desiring the Court to remitt the fine of ten
pounds laide upon him last year.

Also a  Petition from William Mead, on behalf of John Richardson (his son-in-law), that a fine of ten pounds
laide upon him be abated.

The two sons, Joseph and John, migrated to Hempstead, L. I., and following records further substantiate the statement that Joseph did not die young or go south.

1659, February 3. The Town of Hempstead paid Joseph Mead nine shillings for a voyage from Stamford to Fairfield to see about procuring a minister, with letters from Hempstead to the Rev. Mr. Wakeman.

From the last entry taken from the Records of the Town of Hempstead, it will be seen that Joseph returned to Stamford; moreover we find in the court records of the New Haven Colony that in:

1662. Joseph Mead, Richard Hardey, who was the father-in-law of John Mead (2), and others, declared to be freemen of the Colony of Connecticut by the Assembly, and Mr. Gould was authorized "to guie them ye oath of freedom, at ye next Court in Fairfield." 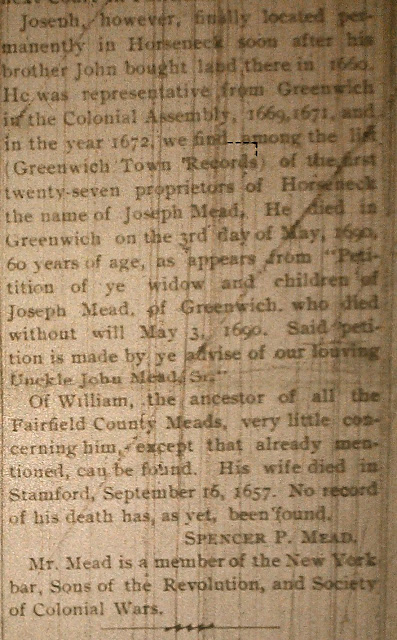 Joseph, however, finally located permanently in Horseneck soon after his brother John bought land there in 1660. He was representative from Greenwich in the Colonial  Assembly, 1669, 1671 and in the year 1672, we find among the list (Greenwich Town Records) of the first twenty-seven proprietors of Horseneck (Greenwich) the name of Joseph Mead. He died in Greenwich on the 3rd day of May, 1690, 60 years of age, as appears from "Petition of ye widow and children of Joseph Mead, of Greenwich, who died without will May 3, 1690. Said petition is made by ye advise of our louving Unckle, John Mead, Sr."

Of William, the ancestor of all the Fairfield County Meads, very little concerning him, except that already mentioned, can be found. His wife died in Stamford, September 16, 1657. No record of his death has, as yet, been found.

SPENCER P. MEAD
Mr. Mead is a member of the New York bar, Sons of the Revolution, and Society of Colonial Wars. 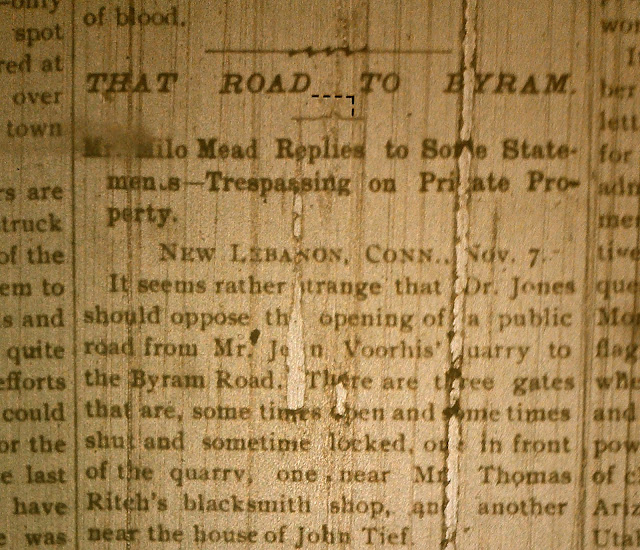 Mr. Milo Mead Replies to Some Statements-Tresspassing on Private Property.

It seems rather strange that Dr. Jones should oppose the opening of a public road from Mr. John Voorhis' quarry to the Byram Road. There are three gates that are, sometimes open and sometimes shut and sometimes locked, out in front of the quarry, one near Mr. Thomas Ritch's blacksmith shop, and another near the house of John Tief.

It is reported that Dr. Jones said in an address to the adjourned town meeting, that the proposed road began at Talbot's lane and ended in Mr. Voorhis' barnyard, which is a misstatement, not to say a prevarication. It begins far enough from the end of Talbot's lane to admit of a public road of thirty feet to come between, namely the Byram Road which leads south to Byram Point, and Port Chester and north to Byram Ridge and Glenville and further on to the village of Greenwich.

The path that the public has occupied is between two barnyards, fenced on each side and the public have for years, passed between them. Dr. Jones would hardly say that his carriage wheels have ever been badly besmeared by the manure in the path. Dr. Jones said __ace at my house that he wishes that there was a road through there referring to a route a few runs further east, near where Sylvester Hills has a quarry, a number of years since, which surface of about forty feet, where the path is now traveled comes within fifteen or twenty feet of it. It is propose to avert the risk of driving off this quarry by adopting a route further west and having it free to the public. Perhaps it would be pertinent to the case, to inquire of Dr. Jones how many years since, he began to drive through Mr. Voorhis' "barnyard" if he has paid him anything for the privilege, or even thanked him. A boy writing in a Port Chester paper states that Belle Haven Avenue ends at a tree. Well there is a big willow tree near the proposed end of it, but the Selectmen have authority to remove it if necessary. This is what the Statute says:

SECTION 2699: The Selectmen of each town may lay out necessary highways therein.

The public have for years trespassed on the property of individuals in respect to crossing the land of Underhill Lyon and Thomas Ritch in gong from Mr. J. Voorhis' quarry to the Byram Road. There is no question about the right of the public to travel on what is called John Grigg's road ___ Mr. Voorhis' bridge and under the railroad to K_eville, it has been traveled without let_ or hindrance for more than twenty-five years in the same track excepting when it was moved by the railroad company, but from the bridge to the willow tree about ten rods there might be a question whether the public could rightfully travel it without the action of the Selectmen which can be done according to Section 2699 of the Statutes of Connecticut.

If there are any misstatements in this article, anyone is invited to correct them, through the columns of the GRAPHIC.


Posted by Historic Mead Family Burying Grounds Association, Inc. at 11:24 AM No comments: