Joshua Mead died Sunday night at his home in Round Hill following an illness of some duration.

The deceased was well-known in Greenwich as well as in surrounding towns, having been a life-long resident here. His life was spent in farming, in which industry he was well versed. In addition to his farm at Round Hill he owned tracts of real estate in North Greenwich which is valued highly.

Besides a wife the deceased is survived by four children, Mrs. Robert Jones, Mrs. Edward Leach, Herbert and John Mead, all of Round Hill; two sisters, Mrs. Guthrie of Port Chester, and one brother, John L. Mead, of Round Hill.

The funeral service will be held Wednesday afternoon at two o'clock at the late home. Rev. H.B. Alley will officiate. 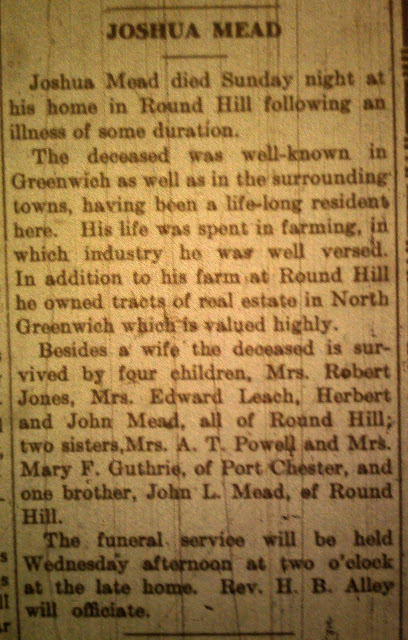