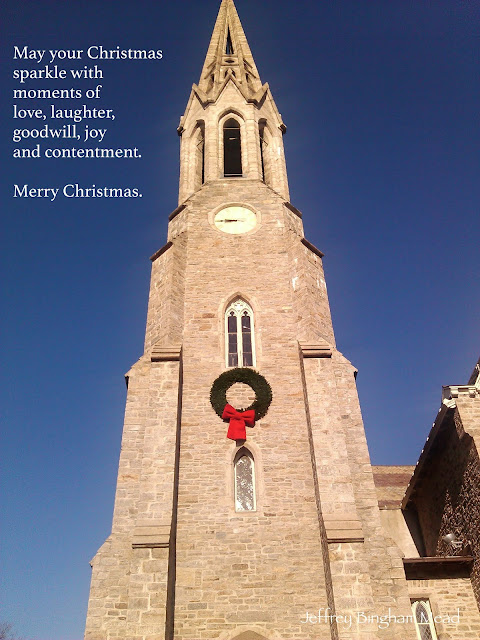 Mention was made in the article published last week in Friday's issue of The Greenwich News and Graphic of Capt. Joseph G. Mead, the genial owner of the building located on Putnam Avenue, where the Greenwich Graphic was printed for several years. he was an unusual type of man, or would be if living at the present time. In his day and generation, most of the prominent men living in Greenwich were of similar personality. The kind of men whom the Rev. Dr. Benjamin W. Farrington, for 55 years rector of Christ Episcopal Church once told the writer, were devout, strong mentally and physically, dependable, kind neighbors, generous and sympathetic to those in need, when he was engaged as minister in charge of Christ Church parish in 1833, and for many years afterwards, not a few of them were personally known to the writer, and in interesting talks with them, much of the historical information forming the basis of the articles on Greenwich Life, published in the News and Graphic was learned.

Capt. Joseph G. Mead was that kind of man. Conservative, he was, most certainly, believing firmly in the traditions of his ancestors, wicking no change in the quiet, rural life of the community, the sentiment generally prevailing among the Greenwich residents in his day. And it is no wonder that they felt that way, for Greenwich was certainly an alluring old town then, with beauties of nature to be seen at all seasons of the year, many of which exist now only in the memory of Old Timers, having been obliterated by the changes resulting from Greenwich becoming the most widely known suburban town in the vicinity of New York City, and the increasing population resulting.

Capt. Joseph G. Mead was of medium height, broad shouldered and rugged, made so, doubtless, because of his life as a sailor, having been captain of a coasting schooner, plying between Davis Dock, Greenwich, and New York City, carrying cargoes of Greenwich produce to the New York City market.

For many years he was a prominent member of the Second Congregational Church occupying an important position in the religious activities of the community. He lived with his wife and family of several sons and daughters, in a large square house, always painted white, surrounded by several acres of land, located on Putnam Avenue just west of the building where the Greenwich Graphic was printed. It was a noticeable old place because of the somewhat fascinating rural charm about it, and though the house is still standing and occupied by members of his family, all that has disappeared, the noise of automobiles, and the stir in the business buildings now hemming in the attractive old homestead replacing the hum of the busy lonely bees, and the sight of the gorgeously colored butterflies that flitted from blossom to blossom, of the little flowers growing in the old fashioned garden.

Capt. Mead also ran a quarry on the north side of Toll Gate Hill, maintaining a prosperous business for a number of years. So it will be realized that he was a very important man in the community. And some of the members of his family have also been quite prominently identified with Greenwich life. The late Capt. Joseph G. Mead, Jr., his son, was captain of Company G, the "crack" company of the "crack" 4th regiment, Connecticut National Guards, at the time Husted W.R. Hoyt, of Greenwich, one of the noted lawyers of this state was Colonel, when the regiment went to Philadelphia to participate in the Centennial celebration the 4th of July, 1876.

Frank, son of Capt. Joseph G. Mead, past master of Acacia Lodge, F. and A.M., has been a popular member of Amogerone H. & L. & H. Co. for years and was chief of the fire department for sometime, and Miss Emma Mead, a daughter, recently resigned from Greenwich Post Office, where she filled an important position with marked ability, for many years.

In concluding, "Bert," famous grandson of Capt. Joseph G. Mead, son of Capt. Joseph G. Mead, Jr., the very efficient clerk of the Board of Sewer Commissioners, should not be forgotten. Marriages made "Bert" a famous young man, his name appearing in more first page articles of New York newspapers for a number of years than any other Greenwich resident. As Justice of the Peace for eight years he became known as the marrying justice because elf newspaper prominence many couples coming to Greenwich from New York to be married by the genial "Bert." They came to Greenwich because of the liberality of the Connecticut marriage law, not so liberal now by legislative act. There were not many Gretna Green marriages among them, marriage of runaway couples, but knots for actors and actresses and with few exceptions they have lived happily ever since, that is happily in most cases.

"How many marriages did you perform," the writer asked "Bert."

"Can't say," was the reply, "but it was several hundred."

"Suppose you received some large fees," further queried the writer.

"Bert" is not marrying couples now. He is no longer Justice of the peace, and the business is not what it used to be before the law was changed, a few couples coming to Greenwich to get married.

Tin weddings are usually very pleasant affairs, and that of Mr. and Mrs. S. Irving Mead which was celebrated on Tuesday evening at their residence near Stanwich, was no exception to this rule. About thirty people were warmly received, and hospitality entertained by Mr. and Mrs. Mead on that evening. Many more had been invited, but owing to sickness and other causes were unable to attend. The evening was spent in social pleasures customary at such times. A bountiful collation was spread, enough for three times the number of people present. Mr. and Mrs. Mead received many letter of congratulations, and they were wished "many happy returns of the day" in messages from those unable to be present. They also received many pleasant remembrances, mostly ___ as befitting the occasion, such as tin spice boxes filled with spice from Mr. and Mrs. C. Mead; a tin pan filled with cut flowers from their bachelor friend Mr. W.J. Mead, Jr.; a tin cake box filled with cake from Mr. and Mrs. Will J. Mead; a parlor lamp, not tin from Mr. and Mrs. Smith Fowler; a cake basket from Mr. and Mrs. Colgrove; a patent dripping pan from rev. and Mrs. Potter; a bread raiser, a big tin one, from Dr. B.E. Mead; a night lamp from Mr. and Mrs. E reynolds; some tin ware from Miss S. Hubbard, a hand painted tin plaque from Miss Finch; a porcelain coffee pot, from Mr. and Mrs. L. ferris; some spice boxes from Miss S. Reynolds; tin syrup cup from Mr. and Mrs. Farrington; a sugar spoon from Miss G. Snyder, and numerous other articles from friends such as, jelly glasses, glass tea set, soap shaker, etc. The guests on their departure expressed themselves to the host and hostesses having spent a pleasant evening, and hoped that they would live to celebrate their golden and diamond weddings.