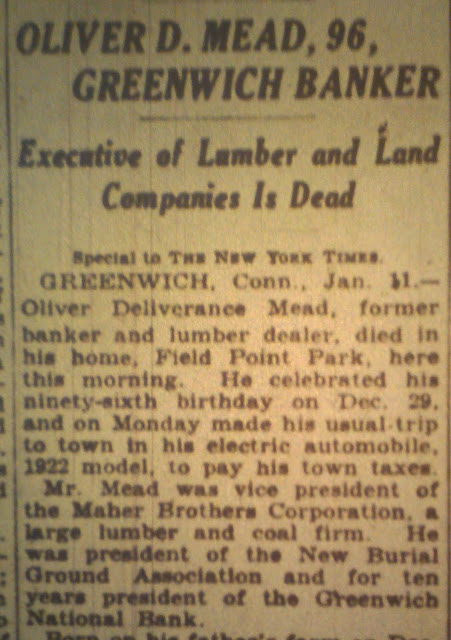 Oliver Deliverance Mead, former banker and lumber dealer, died in his home, Field Point Park, here this morning. He celebrated his ninety-sixth birthday on Dec. 29, and on Monday made his usual trip in town and his electric automobile, 1922 model, to pay his town taxes.

Born on his father's farm on Dec. 29, 1842, he attended Greenwich Academy and in 1882 moved to the Zophar Mead homestead, Field Point Park, a house built in 1792, which he inherited with 120 acres from his cousin, Oliver Mead. He organized the Field Point Land Company and served as its president for many years, dividing the farm into home sites, which now make up Belle Haven. For thirteen years he served in the Connecticut militia and was for a time Justice of the Peace.

In 1864 he cast his first vote for Abraham Lincoln and had voted in every presidential election since that time. Mr. Mead sought to enlist in the Union Army during the Civil War. "They thought I wasn't physically able," he said recently, "and now there are none of them left." He was the oldest member of the Elks and Masons here.